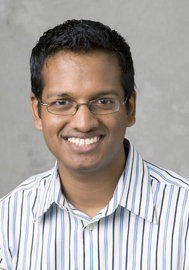 Bio: I am an associate professor with the School of Electrical and Computer Engineering at Purdue University.

My research area is Programming Languages and Compilers, and my interests lie specifically in developing languages, compilers and runtimes that support efficient programming and high performance on emerging complex architectures.

I graduated in 2002 with a B.S. in both Computer Science and Computer Engineering from North Carolina State University. I received my Ph.D. in Computer Science from Cornell University. My advisor was Keshav Pingali. After receiving my Ph.D., I joined the Institute for Computational Sciences and Engineering at the University of Texas at Austin as a postdoc, where I worked with the Intelligent Software Systems (ISS) group. Since the fall of 2009, I have been in the School of Electrical and Computer Engineering at Purdue University. I received an NSF CAREER Award in 2012, a Department of Energy Early Career Research Award in 2013, and the Presidential Early Career Award for Scientists and Engineers in 2016.